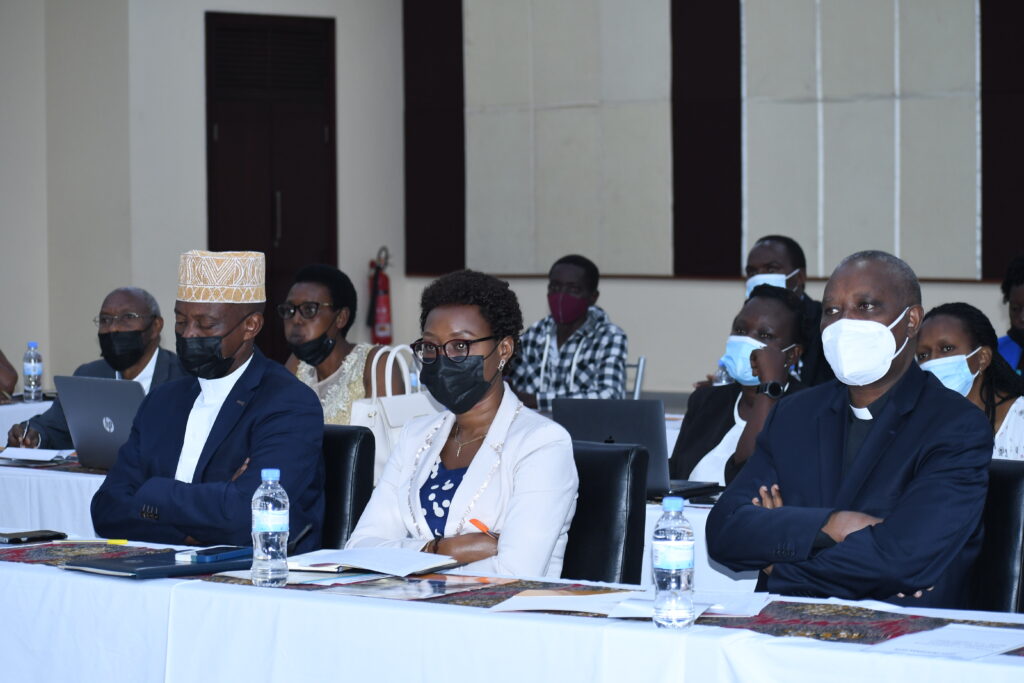 On Friday 11 March 2022, Jesuit Urumuri Centre in collaboration with Nyina w’umuntu Organization brought together political actors, religious leaders and members of the civil society for a discussion on the findings from the just concluded research project on domestic violence in Rwanda. This conference aimed to discuss the root causes of domestic violence that lead to family breakdown in Rwanda. 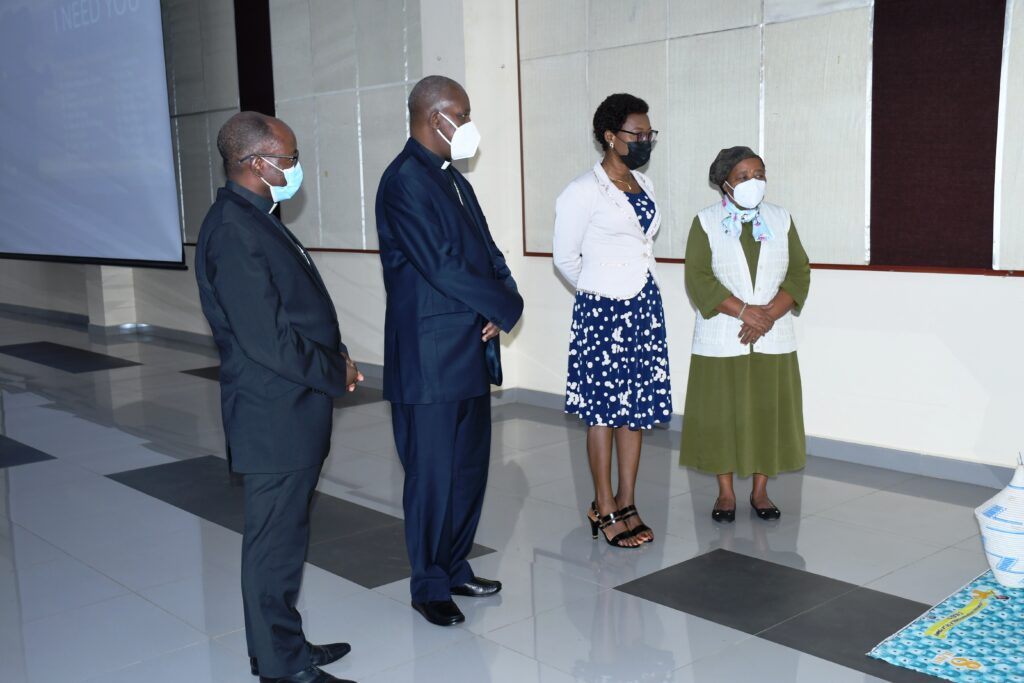 Among the many distinguished guests at this historic event were the minister of gender and family promotion in Rwanda, Hon. Prof. Jeanette Bayisenge, archbishop of Kigali and president of the Rwanda Episcopal Commission for the Family His Eminence Antoine Cardinal Kambanda, the Regional Superior of the Jesuit Rwanda-Burundi region Rev. Fr. Fabien Gasigwa, SJ, the Mufti of Rwanda Mr. Salim Hitimana, the director of Nyina w’umuntu organization Mrs. Donatilla Mukasekuru, Catholic Priests in charge of diocesan commissions for the family in Rwanda,  district officers in charge of gender-based violence and some media. 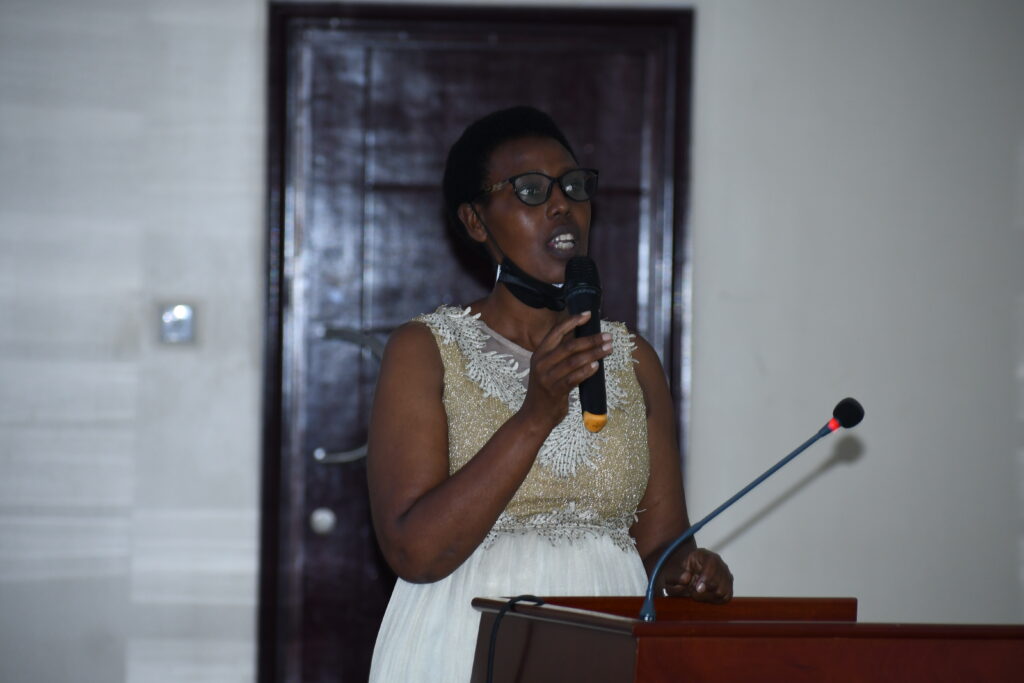 The symposium started with a discussion on the theme entitled “The Work and Role of Religions in Mitigating Domestic Violence in Rwanda” and was discussed by four panelists. Representing Seventh Day Adventist Church, Mrs Esperance Murerabana who is the leader of the women children and family departments in the Rwanda Union mission shared that in her Church, they have put in place departments to teach children how to live towards a better life. The Church also teaches women how to raise their children as according to her, much value is placed on this education as it is the belief that women influence the family much more than men do. 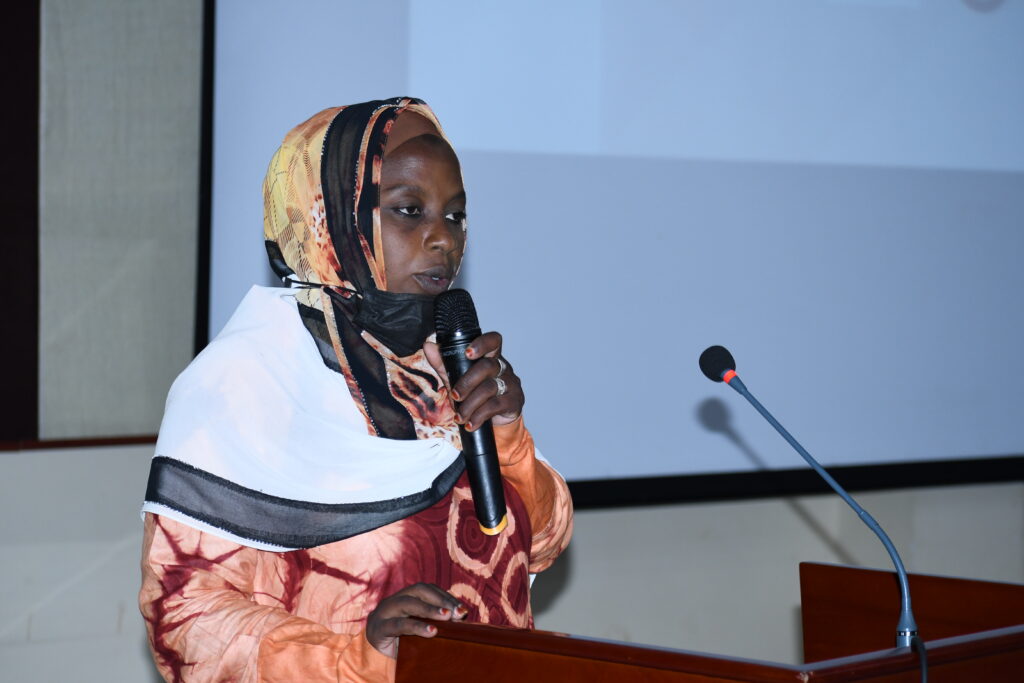 Mrs Fatina Mukeshimana who is the General Secretary in the Commission of the Muslim Women’s Development in the Rwanda Muslim Community (R. M.C) echoed these remarks adding that the religion of Islam teaches mutual respect among couples, emphasizing especially on patience with each other. 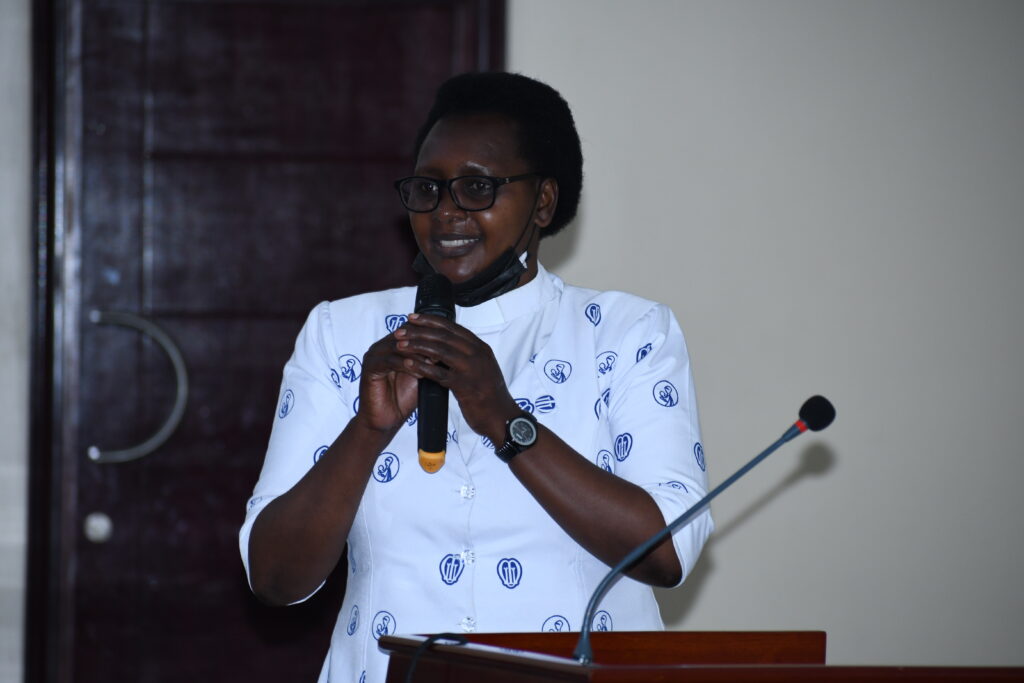 Rev. Annonciata Kabega who represents the Anglican Church and is the coordinator of the Mother’s Union in EAR-HQ shared similar sentiments but also spoke about her Church having created Mothers’ Union, Fathers’ Union as well as Youth’s Union. These unions’ members are mostly exemplary members of the society and they are mold to become models to other members of the congregation. 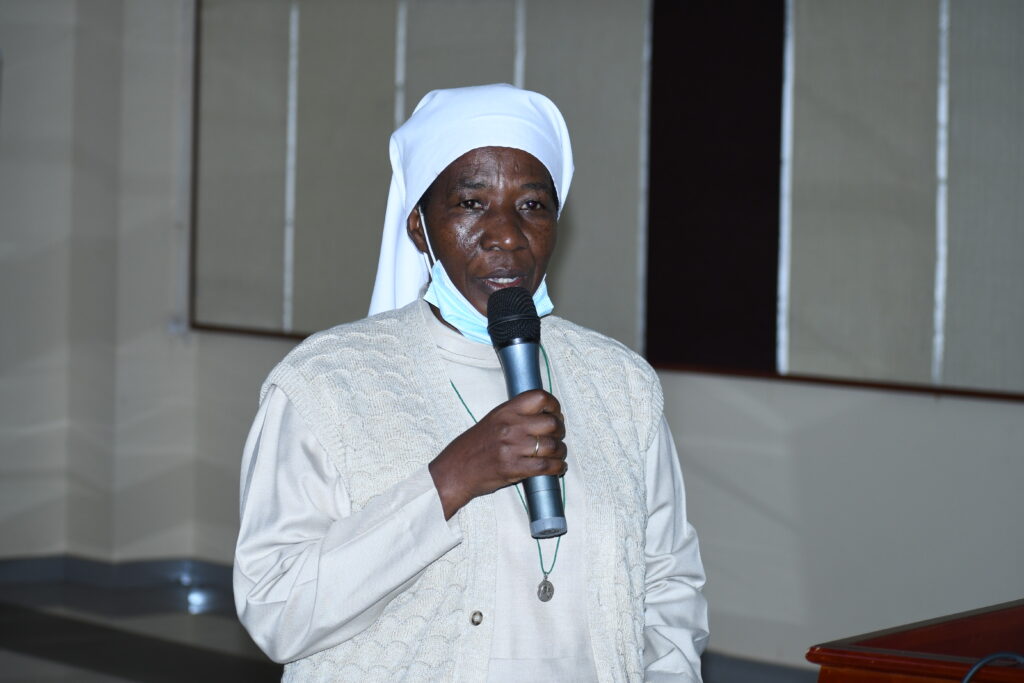 Closing the 1st session was Sr. Agnes Uwimana who is the director of Action Familiale Rwandaise. She too shared that the Catholic Church teaches mutual respect, complimentarity and accountability. She added that the Church also teaches couples natural methods of birth control such that they are able to raise the number of children agreed upon by both parties. Researches show that this too reduces conflict in marriages.

After the above discussion, the symposium turned to the presentation of research findings on the root causes of domestic violence; a project that was initiated in 2018 by Jesuit Urumuri Centre and Nyina w’umuntu organization. Prof. Laetitia Nyirazinyoye from the University of Rwanda presented the objectives, methodology, results of the findings and recommendations of the research. She shared that cheating, drunkenness and disagreements about family property are major contributors to domestic violence.

While conducting the research she noted that respondents observed an area of weakness in their religious leaders. Religious leaders were reported to lack enough time to serve all people who need their assistance.  Among recommendations that she made was the need to promote collaboration between governmental, non-governmental and religious institutions in setting up couple-counseling services to families in need.

Mr. Emmanuel Karamage who is the project coordinator of Bandebereho Transition project in Rwanda Men’s Resource Centre (RWAMREC) also gave a presentation about sensitizing men to be better involved in their families. He shared that during recent COVID-19 restrictions, conflict and alcohol consumption were high. Despite this, improvements in couple relations were tremendous due to the fact that men shared responsibilities with their wives.

Gracing the occasion, the minister of Gender and Family Promotion in Rwanda, Hon. Prof. Jeanette Bayisenge offered her remarks by congratulating Jesuit Urumuri Centre, Nyina w’umuntu organization and the Church in general for their contribution towards the promotion of integrated families. She also shared that the ministry under her responsibility, also run several activities aimed at promoting integrated families including Umugoroba w’umuryango, Twubake Urugo Rwiza and Isange One Stop Center. She then encouraged religious leaders to keep the spirit of collaboration with the government. 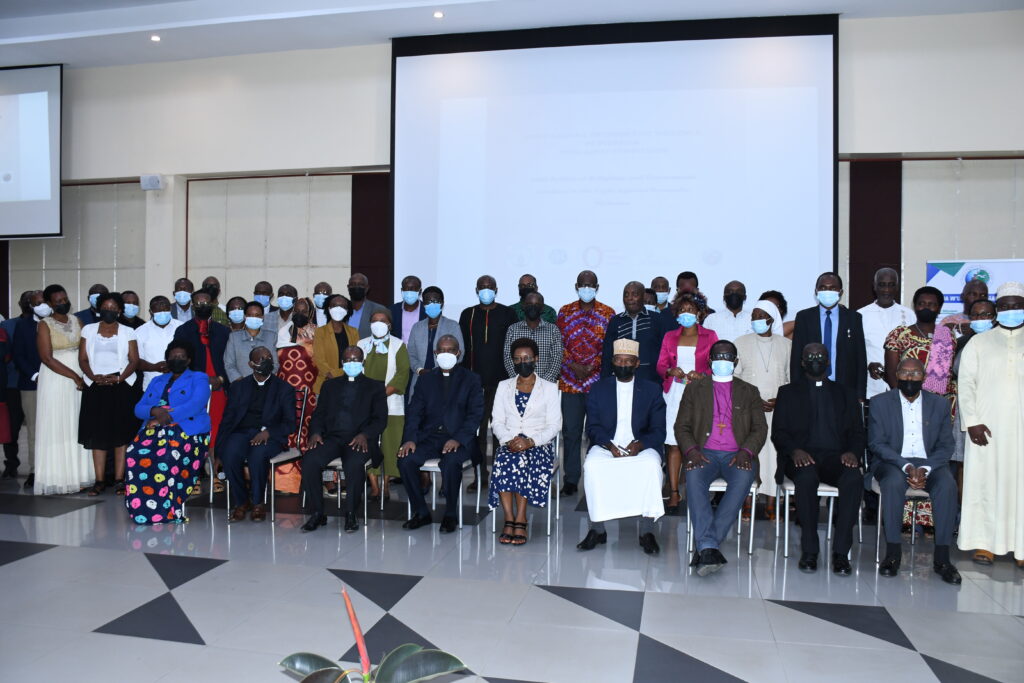 His Eminence Antoine Cardinal Kambanda concluded the discussions by first addressing his gratitude to Jesuits in Rwanda and Burundi as well as to Nyina w’umuntu Organization for the initiative of the research. He also thanked the government for its interest  in the development of the family.  He finally invited families to conversion and prayer insisting that these two tools provide strength for the soul to defeat evil.