Leaving no one behind: Emergency Response to COVID-19 Crisis

Leaving no one behind: Emergency Response to COVID-19 Crisis 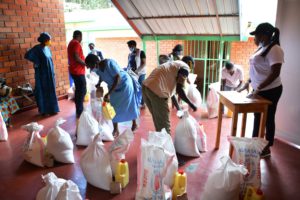 The pandemic COVID-19 has hit the whole world like a tornado and is leaving many casualties along the way; among them are individuals whose jobs and means of income and means of providing for their families have come to an end as a result of governments’ lockdown orders. In Rwanda, the lockdown began on the 22nd of March and though it was partially lifted on the 4th of May, group gatherings are still discouraged, many institutions are unable to fully function, and a number of people are still out of employment or without any form of income. Schools for instance are due to open in September; such a scenario has forced some private institutions to trigger the suspension button of their employees’ contracts.  It is in response to this that Jesuit Urumuri Centre has sought to collaborate with local authorities in the sector of Remera joining efforts, in order to support the most vulnerable families with basic necessities during these trying times. 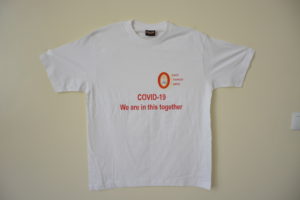 On Thursday the 7th of May 2020, a team consisting of the staff of Jesuit Urumuri Centre made its way to Rukiri II cell in Remera sector with food relief for a program dubbed “Leave no one: Emergency Response to COVID-19”. The beneficiaries included families from villages of Rebero, Ubumwe, Amahoro and Ruturusu II. Among them were families who previously lived on incomes gained through casual works, such as street vendors. Another group among the beneficiaries was made of the homeless whose residences have been destroyed by heavy rains and are currently unable to secure new rental homes due to convergence of the COVID-19 pandemic and the financial constraints that followed its prevention measures.

In her welcome remarks, Mrs. Niyonsaba Françoise, executive secretary for Rukiri II Cell expressed that her office has been overwhelmed with cries for help from the residents of her constituency. “The majority are street vendors and those in the service industry; people such as waiters, cleaners, taxi-moto drivers and many others; we have felt helpless in face of the huge call for help at hand” said Mrs. Niyonsaba. She went on to also express her gratitude to Jesuit Urumuri Centre for the much needed support to the citizens of her area. The said assistance was distributed among 50 families of 5 or more members each. In total about 300 persons are thought to have benefited from the food relief support which amounted to 500 kilograms of beans, 500 kilograms of rice, 500 kilograms of maize flour, 150 litres of cooking oil, and 50 kilograms of salt.

Mr Rugaba J. Julien, Programs Manager at Jesuit Urumuri Centre, addressed the families assuring them of the Centre’s sympathy and solidarity in these times of the globally shared concern of the pandemic. “We thank God, our supreme provider, who enabled us to bring these food items to help relieve you of some of your worries, one of which is hunger we’re sure. We assure you of our prayers, as we continue to face these tough times together” he said. 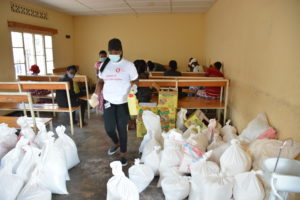 After receiving their shares, several people came back to express their gratitude to JUC staff; Mrs Mukabonera Francine a mother of 7 said “before the pandemic outbreak, I was a street vendor and sold vegetables, my husband has had mental illness for a long time, so I was the breadwinner; the period of the lockdown has been difficult and challenging for my family, I am truly grateful to the Jesuits!”

Fr. Patrice Ndayisenga SJ, director of Jesuit Urumuri Centre, expressed his hopes of being able to reach more vulnerable people in the suburbs of the City of Kigali, in the near future. While a quick return to normalcy remains the ultimate hope for everyone; he promised that Jesuit Urumuri Centre will continue to monitor the fate of the most vulnerable families and will stand by their side for as long as the Centre can reasonably do.