AHAPPY is an acronym for AJAN HIV and AIDS Prevention Programme for the Youth.

It is a programme initiated by AJAN (African Jesuit AIDS Network) in different countries of Africa and Madagascar. The launching of this program by JUC was a culmination of a ten days training of trainers workshop that was held in Kigali from 22-31 July 2019, which had gathered 30 teachers from 15 Catholic Education Schools in the Archdiocese of Kigali.

The purpose of the workshop was to awaken participants to different problems that are threatening the youth, especially HIV and AIDS pandemic, early pregnancies amongst teenagers and drug abuse urging them to join hands for positive solutions, once back to their respective schools.

As highlighted by Fr. Elphège QUENUM, SJ, the director of AJAN, AHAPPY Generation Programme for Youth is rooted in the tradition the Ignatian Pedagogy which promotes integral development of a human person.

In many countries of Africa, AHAPPY Generation Programme has shown effective results in the fight against HIV and AIDS, early pregnancies and drug abuse among school going adolescents.

In its approach around Africa, AHAPPY Generation Programme is characterized by the existence of AHAPPY Clubs or families in schools and community institutions, formation on affectivity, sexuality and value-based education.

The primarily target group are youth aged 10-24 years old and secondary target are adults who interact with youth such as school teachers, parents and other community organizers. 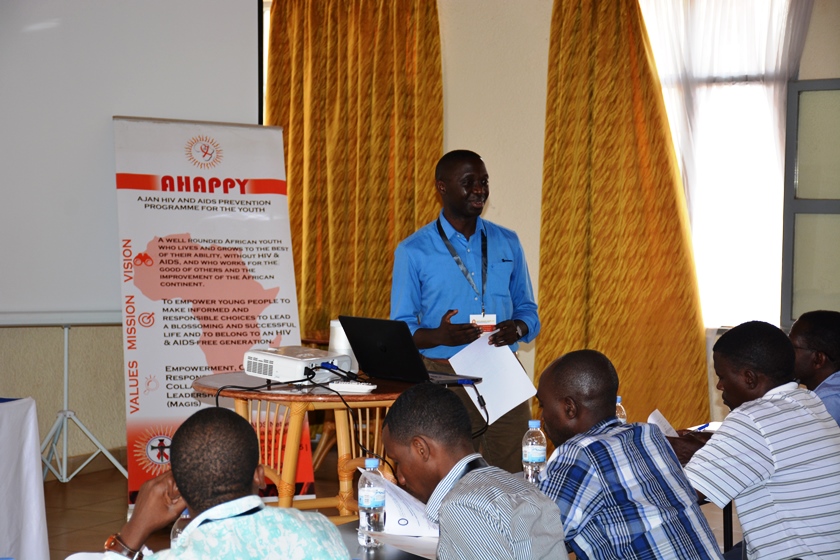 During the launching ceremony, Father Patrice NDAYISENGA, SJ, Director of JUC emphasized that AHAPPY Generation Programme lands in Rwanda at the right time, as the young generation, especially school children between 10-18 years old, need to be educated on how to lead a happy life free of drug abuse and HIV infection.

For the pilot phase, the programme will operate in Catholic schools around the Archdiocese of Kigali, and its successful implementation will dictate the extension of the same to other regions and institutions in Rwanda.

The Director of African Jesuit AIDS Network (AJAN) and Patron of AHAPPY Programme in Africa, Fr. Elphège Quenum, SJ, on the other hand, has highlighted that the programme is steadily taking root in different countries of the Sub-Saharan Africa.

He said that, on a wide operational range, AHAPPY Generation Programme conducts its activities for the youth and people who accompany them, through Training of learners ( TOL), Training of trainers, teachers, and educators through workshop (ToTs) and Formation of AHAPPY Clubs in schools, chaplaincies, as well as other educational settings.

He thanked Jesuit Urumuri Centre (JUC) for the idea to invite the teachers to the workshop, because they will be AHAPPY Focal Points in different schools where they will serve as mentors and guardians of AHAPPY Generation clubs.

In his address, Msgr. Casmir UFITUMUKIZA, the Vicar General who stood in for the Archbishop of Kigali, said that a special emphasis must be put on the family, because it is the foundation of the Church and society.

The family is a composition of both parents and children. He added that a special attention is to be taken on behalf of children who are mostly victims of deadly illnesses such as AIDS related illnesses, and other problems that impair their own development and that of their families and communities in general. There is a great need to listen to children.

He also invited the audience to challenge their peers, parents, teachers, and community mobilizers on the crucial importance of listening to children. Children need parents and educators for guidance in their most life-decisive queries touching their moral upbringing.

After the celebration of the holy mass, Msgr. Casmir UFITUMUKIZA led the rest in the official launch of AHAPPY Generation Programme by cutting the cake that was prepared for the occasion.