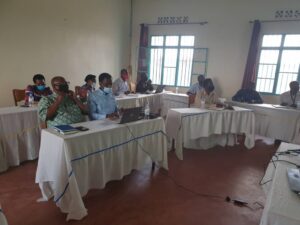 From the 24th to the 26th of August 2020, Jesuit Urumuri Centre is running a Catholic Social Teaching workshop in the diocese of Gikongoro. On the first day, two modules were covered: The theological and anthropological foundations of the CST, and the historical development of the CST.

On the first module, the facilitator highlighted that even in ancient Israel prophets have always raised their voices against social injustices. With the coming of Christ, still concerns for justice were echoed. Since the beginning of the Church, though not clearly articulated in the message as social teaching, the Church has always had social concern in her teachings. The social teaching of the Church has its roots in the occurrences of injustice that happen in society, the gospel teaching, and the Church tradition. In relation to human life and human dignity, it was highlighted that mankind should be looked upon in all his dimensions: physical, intellectual, emotional, spiritual, and historical. Mankind should never be dissected because they are who they are when taken holistically in all their existential considerations.

In the second module about the historical development of the CST, it was noted that more elaborate social teaching of the Church started with the inaugural encyclical Rerum Novarum of Pope Leon XIII in 1891. The facilitator situated the three major epochs of the development of the CST. The first epoch being the Industrial Revolution that gave rise to Rerum Novarum. From that time, subsequent social encyclicals accompanied moments of crises such as the Great Depression, World Wars, and Waves of independences from colonialism and the Cold War. These epochs were marked by social questions and injustices about which the Church was greatly concerned. The Church could not be indifferent to the misery and cry of the people trapped between the blocks fighting to take control of the world to the detriment of the least privileged. 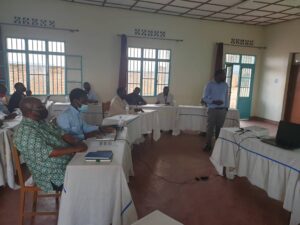 Since the backbone of the CST is to safeguard human life and the promotion of human dignity, participants, in their group discussions, were asked to share insights on their perception of the human person. Different interventions concurred that mankind has been created in the image of God and as such, mankind deserves all attention and protection.

All in all, the first day of the workshop, rightly called the icebreaker, raised a lot of curiosity and a sense of urgency. It raised curiosity in the sense that participants recognized that there is much treasure in the Church that could help Christians but has remained somehow unknown to the ordinary people. It also raised a sense of urgency upon discovering the level of their innocence that results from the call of the Church to addressing real life-questions that affect the life of the citizens such as minimum wage and Christian engagement in politics. There was a great concern that people are eager to claim a salary increment but never question how much they pay those they also employ. The same for politics, people claim their rights and complain about unjust social structures without ever making a step further to take part in circles of decision making.

With these CST training series, the participants have never been the same. But one emphasis has been common: the conversion of hearts and a Christ-like look at mankind and society.