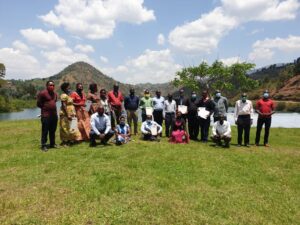 The pastoral zone of Kibuye is a constituent of the Nyundo Catholic diocese. During the week of September 14th – 18th 2020, Jesuit Urumuri Centre was there conducting a workshop on Catholic Social Teaching. Participants were selected among pastoral agents of the Justice and Peace Commission in Kibuye. The workshop which closed on Thursday the 17th ended on a high note of joy and celebration. The joy of discovering the wisdom found in the social teaching of the Church and the celebration of certificates of completion.

On behalf of his fellow participants, Mr Francois Bavakure expressed the timely benefits of the workshop. It was the first time they heard about the Catholic Social Teaching. For long, he and his colleagues had assumed that the Church primarily teaches the Gospel and administers sacraments and intervenes in social welfare only through aid relief to needy people. The dimension of advocacy and solidarity had hardly been considered as an essential component of the mission of the Church.

Still on the impressions, participants were impressed that there are problems in society which one can easily bypass simply because they do not directly affect their lives. From now on, participants feel the urge to make such problems theirs as custodians and partakers in the mission of Christ. Jesus came to heal the world and the social evils that the world faces are concerns for the Church and for every person of good will. 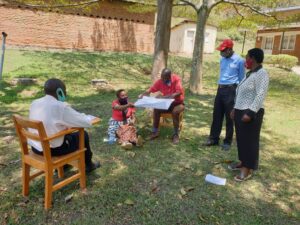 The understanding of the Church also improved during the workshop. In relation to social responsibility, there was a hasty jump to seeing the hierarchy as the only organ to voice out concerns about justice. In their own words, the participants have confessed that the Church was reduced to Bishops, priests, religious, and the episcopal conference. The lay faithful understood themselves as mere recipients with no direct responsibility to initiate or promote works of justice and social transformation in their localities. After realizing that the Church has been consistent and coherent in its social teaching, and always calling all people of good will to conversion, participants in the workshop rediscovered their responsibility and vowed to renew their commitment in making their communities better places for all. Lastly but not least, participants also expressed the willingness to learn more, on their own, about the social teaching of the Church and to spread the little they have received to their fellow Christians.

On behalf of the Jesuit Urumuri Centre that sponsored and facilitated the workshop, the director Father Patrice Ndayisenga SJ recalled Ignatian spirituality whose knot is the 30 days-retreat or 4 weeks retreat. After 4 weeks of intensive prayer in a closed retreat, retreatants get out to start the 5th week that lasts their lifelong. This is the time they bring to fruition all the graces received during the 4 weeks of the retreat. So, workshop participants were also reminded that they are entering their 5th week to preach what they learnt and practice what they preach. The closing ceremony ended with the awarding of certificates of completion. With Kibuye pastoral zone, the Diocese of Nyundo counts the highest number of beneficiaries of the training that JUC is animating across the Catholic dioceses, and the journey continues!