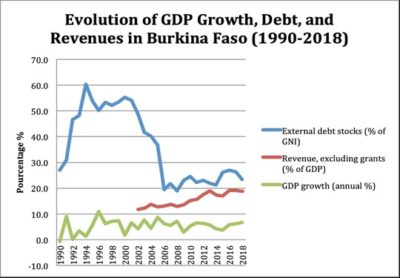 In the context of Covid-19, debt relief and debt cancellation are in the top list of the bilateral and multilateral measures that developing countries are benefiting from. What are the challenges of these measures? In order to help deepen what is at stake, the current reflexion first provides a working definition of the main concepts. Second, we discuss the economic impact of a temporary debt relief or cancellation. Third, we suggest a few conditions for the efficiency of debt relief and cancellation, based on the case of Burkina Faso.

A government deficit, over a year period, represents the amount by which its revenues are less than its expenses. Government debt at time t is then the cumulative sum of all previous deficits of the government. Debt service refers to two distinct money flows: first the principal (that is the annual share of the debt that should be paid, or the annuity), and the interests (that is computed based on the capital that is yet to be paid). The amount corresponding to the interest paid is properly called the “debt burden”. Debt relief consists in a temporary, time-bound suspension of the debt service. It therefore has two effects: the debt (as capital) is postponed and the debt service (interests and annuity) is suspended. However, in the case of debt forgiveness, the capital of the debt and the corresponding interests are just cancelled. Given the above working definitions, what is the economic impact of a debt relief and of a debt cancellation?

Let’s consider that for a $1 billion debt, a country owes $100 millions as follows: $70 millions for the annuity and $30 for the interest payment of the debt. Let’s assume further that the country has already paid back $400 millions of the capital of the debt, so that it still owes $600. If the country benefits from a temporary debt relief, it will immediately have at its disposal $100 millions that he can use to meet expenses other than the debt service. However, if the country rather has a debt cancellation, it follows that it will neither pay the $100 debt service nor the rest of $600 and the corresponding interests payment.

On one side, from the economic point of view, the impact of a temporary relief is to transform the debt service into a disposable fund, immediately available to a government. On the other side, a debt cancellation provides both the funds equivalent to the debt service and the remaining amount of the debt. It follows that, everything else being equal, a debt cancellation increases more the flow of money available for government expenditures than partial debt relief. Given that, what are the conditions for the efficiency of the temporary debt relief and of the debt forgiveness on the economy of a country?

In economics, efficiency refers to the optimality of the economic impact. In that case, the efficiency of debt relief or cancellation depends on their usages. Two kinds of scenarii rise depending on whether the funds contribute or not to the growth of the national economy and to the prosperity of the people. Using it expenses resulting from a debt relief or cancellation, a country can strengthen its domestic demand or develop its human capital through investment in health and training, etc. On the opposite, a country could use the unexpected financial means resulting from debt relief to immediately purchase foreign goods and services, to deteriorate its trade balance and, hence, increase its dependency from the rest of the world.

It is worth recalling that, in 1996 and 1999, 42 countries, among which three fourth were African, had their debt cancelled or partly relieved through the HIPC (Heavily Indepted Poor Countries) initiatives from the World Bank and the IMF (the International Monetary Fund) . On April 2020, the temporary debt relief endorsed by the G20 countries concerns 76 countries in the world with 40 of them being African countries. This moratorium impacts almost the same countries which had their debt cancelled by the HIPC initiative. If then, on the short term people may focus on whether temporary debt relief is prefered to debt cancelation, in the long term, the right question is to understand why some countries are repeatedly and structurally indebted, with huge foreign (not domestic) debt. An analysis of the case of Burkina Faso sheds some light on what is at stake.

In 2000, Burkina Faso benefited from a $424 millions debt relief, representing 48,5% of its stock of debt . In 2002, the debt relief amounted to $128,6 millions. The graph above shows the evolution over a period of 28 years of three variables, before and after the HIPC initiative: the GDP (Gross Domestic Product) growth of Burkina Faso, the revenues (as a percentage of GDP) and the stock of debt (as a percentage of national revenue). After the debt relief, the stock of debt started to increase again, even if the rate of growth is slightly not as steep as before. That suggests that despite the HIPC reforms, the fundamental structures of the economies were unchanged.

In the context of Covid-19, we need to avoid “intellectual diversion” that consists, through mimetism, to ask the wrong questions in general and to deal with the questions of other people in particular. In a world dominated by the economy of knowledge, the question is whether our economies will choose to produce endogenous knowledge, whatever the sources of the resources are, so that we can design solutions to meet the challenges of our economies? This is the condition for us to dare to invent a future of shared prosperity for our economies and for our people. 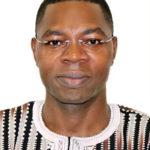 François Pazisnewende KABORE is a tenured Jesuit Professor Economics of the Economics Department of the Africa and Malagasy Council for Higher Education (CAMES). He is currently the Promotor of Kosyam Jesuit University of Science (Ouagadougou, Burkina Faso), and Director of CERCLE (a Jesuit Social Center).

This article was translated from French to English. It was first published in L’ Économiste du Faso. Here is the link to their website https://www.leconomistedufaso.bf/