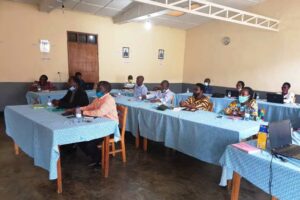 Thursday the 6th August, 2020 was the closing day of the fourth of the series of CST workshops that JUC is organizing across the dioceses of Rwanda. The workshop took place at Centre Bartholomew of Nyundo diocese. This Centre is on the shores of river Sebeya, one of the affluents of Lake Kivu. Participants included pastoral animators, para-judiciary animators, dynamique femmes, a health coordinator and a youth coordinator.

In his opening remarks, Fr. Jean Paul Rutakisha, the priest in charge of the diocesan commission for Caritas and Justice and Peace, highlighted the origins and motivations behind the creation of the pontifical commission of Peace and Justice. He also highlighted that, in creating the commission, Pope Paul VI insisted that the members of that commission at any level should deepen their knowledge of the social teaching of the Church. It is the first time in Nyundo that lay people are trained on the social teaching of the Church. In reference to the example of the Gospel which started with twelve apostles and has now reached the whole world, he expressed his hope that the 15 candidates selected for the training in the pastoral zone of Nyundo will be able to spread the message of Catholic Social Teaching in the entire diocese and beyond.

As the first module of the training covered anthropological and theological foundations of the catholic social teaching, the facilitator recalled that CST came because the church has people at the core of her mission. It is a mission to liberate and save humanity; which is in fact a continuation of the mission of Christ who came into the world so that man can be saved. The salvation of man demands work in synergy, recalling the words of Benedict XVI: “No one lives alone. No one sins alone. No one is saved alone.” As human persons, we are social and interdependent beings. The salvation of one necessitates the salvation of all; and with this, the CST is a true application of our living faith.

For a fairer pursuit of the mission of Caritas and the Commission of Justice and Peace, participants in the workshop were taken on a journey to reflect deeper on the extent of the concept of human person. This meant to emphasize the inviolability of the human dignity as the Gospel and the CST have revealed us.

In order to promote the human dignity, the final module of the workshop equips participants with skills related to social analysis and pastoral planning for social interventions. In this regard, the social engagement should start with acknowledgment and assessment of a social problem with emphasis on the nature of the problem, its causes, and the action to be taken in the light of the Gospel and the wisdom of the Church. As a way of applying the skills acquired, the group discussions were asked to identify a social problem recurrent in their milieu and assess it following the methodological approach of the social analysis and pastoral planning. Two groups worked on divorce and the other group identified drug-abuse as rampant problems in their community. 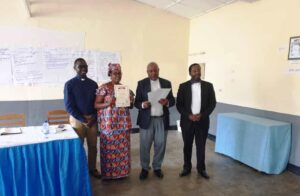 The workshop ended with the issuing of certificates in brief celebratory mood. The Vicar General of the diocese, Monsignor Jean Marie Vianney Nsengumuremyi graced the occasion. He awarded the certificates to the 15 participants who in the words of their representative, Mr. Jean Bosco Musana Rukirande, confessed to have changed perspectives on their conception of mankind and are fully energized to be active advocates of the least advantaged in their communities.