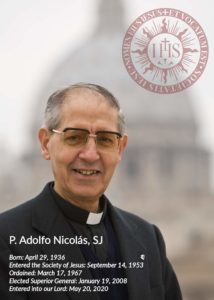 We join the society of Jesus and the world in general in mourning the former superior general of Jesuits Fr Adolfo Nicolás; may you rest in perfect peace padre!

Below is a message from the Jesuit conference of Africa and Madagascar.

“A man of grace and wisdom, simple, unpretentious, dedicated”

The Jesuit General Curia in Rome today announced that former Superior General, Fr. Adolfo Nicolás died, today, in Tokyo, Japan. He was a member of the Jesuit community of Loyola House in Kamishakujii, and had been ill for a number of years. He is deeply mourned by the Jesuits of Japan and Asia Pacific, his family and compatriots in Spain, and his many friends around the world.

“I offer my sincere condolences to the Jesuit province of Japan, to Fr. Nicolas’ family, to the Jesuits in Spain and the Philippines and to his many friends all around the world.” said Fr. Arturo Sosa, current Superior General. “Fr. Nicolás gave of himself throughout his life. It was a life marked by intense service, calm availability and a deep ability to inculturate in Japan, where he went as a young Jesuit. It was a culture he loved dearly and to which he committed himself. His time as General was marked by his sense of humour, his courage, his humility and his close relationship with Pope Francis. All of us here at the Jesuit General Curia mourn him and a special Mass will be offered here in Rome as soon as we can organise it. Because of travel restrictions just now, I cannot travel to Japan for the funeral but I assure all his many friends there of my closeness, my compassion and my condolences.”

All who worked with Fr Nicolás in the General Curia have appreciated greatly his presence during his time as General. “He will be greatly mourned throughout the Society as a wise, humble and dedicated Jesuit, a man of grace and wisdom, simple, unpretentious.” said Fr Sosa.

He had a strong relationship with Pope Benedict and close and warm bonds with Pope Francis.

“The Society was founded to serve the Lord alone and the Church His spouse under the Roman Pontiff” said Fr Sosa. “Fr. Nicolás helped the Society to live in a concrete way this dimension so characteristic of our charism. It was a relationship of availability to the Holy Father which was also full of sincere affection”.

Tribute Message from the JCAM President

“The Jesuits, collaborators and friends of the Conference of Africa and Madagascar mourn the death of our beloved Father Adolfo Nicolás SJ. May his soul rest in peace. We remember him as a wise and caring leader, steeped in our foundational spirituality and imbued with a clarity of apostolic vision. His gift of deep spirituality, apostolic creativity, and intellectual depth will continue to inspire Jesuits and partners in the mission of the Society of Jesus across the world. Among the many acts of generosity and solicitude for the mission of the Society of Jesus in Africa and Madagascar, the Jesuit Historical Institute in Africa stands as a lasting legacy of his visionary and inspirational leadership. May the Risen Christ welcome Baba Nico into eternity. Amen.” – Fr Agbonkhianmeghe E. Orobator SJ

Father Adolfo Nicolás was born on April 29, 1936 in Palencia, Spain. He entered the Society in 1953 and later studied at the University of Alcalá before going to Japan. After studying Japanese, he entered Sophia University in Tokyo, where he studied Theology. Nicolás was ordained to the priesthood in 1967.

He earned a doctorate in Theology from the Gregorian University in Rome. Nicolás then returned to Japan and taught Theology at Sophia for the next three decades. During these years, his obvious talents led to appointments first in the Philippines, as the Director of the East Asian Pastoral Institute (1978-1984), and later in South Korea, where he helped the Jesuits transition from American to indigenous leadership.

In 1993, Nicolás was named to a six-year term as Provincial of the Japanese Province after which he spent three years working with poor immigrants in Tokyo.

In 2004, Nicolás returned to the Philippines to become Moderator of the Jesuit Conference for Eastern Asia and Oceania. Chosen to attend the 35th Congregation of the Society of Jesus in Rome, Nicolás was elected as Superior General of the Order on January 19, 2008 and he renounced in November 2016 being the 30th General Superior of the Society of Jesus. After his time in Rome he decided to go back to Philippines, and finaly to his belowed Japan.

Moments in photos and video during Father Adolfo’s visit to the Eastern Africa Province, the Kakuma Refugee Camp in Kenya and the Jesuit Historical Institute

Photo 2 above: In July 2012, when Jesuits in collaboration with Kangemi Christians were celebrating the ordination of two brothers, and the closing of the Silver Jubilee of Eastern Africa Province Fr. General Adolfo Nicolás SJ was in attendance. The Silver Jubilee of Eastern Africa Province celebration started by holy mass. The liturgy was animated by the Bishop of Ngong’ diocese, Rt. Rev. John Oballa Owaa accompanied by former Father General, Adolfo Nicolás SJ, the then Provincial of Eastern Africa, Fr. Agbonkhianmeghe Orobator SJ and  Fr. Paschal Mwijage SJ. The MC during the liturgy was Fr. Raymond Manyanga S.J. The other concelebrants were more than two hundred from the Jesuits and from different dioceses and different congregations. (Image Courtesy, AOR)

Photo 3 above: Father Adolfo Nicolás SJ shares a moment with refugees during his visit to the Jesuit Refugee Service at the Kakuma Refugee Camp in the northern part of Kenya (Image courtesy, JRS)

Former Superior General Father Adolfo Nicolás SJ visited the Jesuit Historical Institute (JHIA) an institute geared to preserving memory and promoting historical knowledge, started in 2010 as an idea by him to encourage the study of the Order’s largely unexplored involvement in the evangelization of Africa.