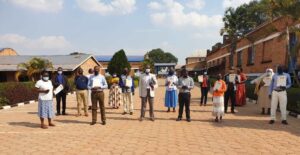 From the 28th to the 30th of July 2020, at the premises of GS Officiel de Butare, Jesuit Urumuri Centre conducted a workshop on Catholic Social Teaching for members of CARITAS and the Diocesan Commission of Justice and Peace. As Butare is known for sheltering many religious houses,  the uniqueness of the participants was noticeable by the presence of a number of priests, nuns and brothers. The priests who participated in the workshop are expected to train volunteers in the Peace and Justice commission across the parishes in the diocese and as usual, the module of the training covers five topics that include: the theological foundation of CST, historical development of CST, principles of CST, thematic study of CST, and the methodological approach to advocacy from CST perspective. 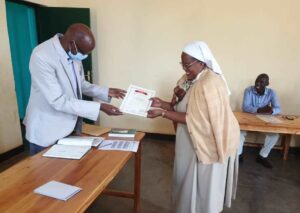 Echoes from participants gave the impression that the Catholic Social Teaching is one of the best kept treasures that are little known, yet essential for putting the Christian faith in action. For instance, people joined the diocese’s work to earn a living but it is now emerging that what keeps people working for the diocese is not money or a salary as such but mainly the concern for the poor and the vulnerable. The work is now perceived more as a Christian service than as a source of income. As Christians, participants have come to realize that the work they are involved in is indeed the Christian call for social engagement in the transformation of the society and the humanization of the human person.

Furthermore, the training on CST has sparked the realization that the world needs conversion. Conversion of hearts at the individual level and conversion of social structures at the collective level. There was a general feeling that those involved in charity work remain at the surface as they offer handouts to beneficiaries without ever questioning the root causes of such grim situations. 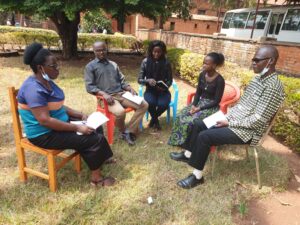 From now on, the workshop has offered an opportunity for more insights for future pastoral action. Projects should include, among key aspects, a social analysis based on the root causes of the social problems that push people into situations of misery and dependence on handouts. In addition to social analysis, it was also noted that the aspect of advocacy is needed in social endeavors of the pastoral intervention to help in shaping and reshaping policies that consolidate social structures and promote human life and dignity.

From the oral wisdom that Rwanda started on the hill of Gasabo before it grew big as we have it now, there is hope that the flame of CST workshops that started at Jesuit Urumuri Centre in Gasabo too will kindle a light across the whole Rwanda.