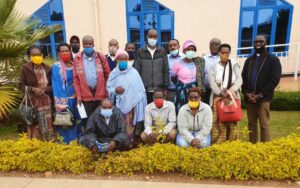 Today, Tuesday the 14th of July 2020, Jesuit Urumuri Centre kicked off the first training in a series of workshops the Centre is organizing, on Catholic Social Teaching across the dioceses of Rwanda. In total, 14 participants (8 men and 6 women) from the Justice and Peace commission in the Byumba diocese will benefit from the three-day workshop. Topics to be covered include: origins and theological foundations of the CST, historical development of the CST, principles of the CST, thematic study of the CST, and methods of pastoral action and advocacy.

Simply put, CST has its origin and foundation in the Gospel and the teaching of the Magisterium. By shaping the CST, the Church intends to provide a resourceful framework that is meant to inspire the faithful in their social engagement. The ultimate goal of all social engagement could be summed up as the promotion of human dignity and the perfecting of human relations which springs from interdependence and interconnectedness between individuals in society.

During the presentation on the historical development of the CST, it was highlighted that since its beginning, the Church has always voiced out its concern whenever a situation of injustice arose. This is a continuation of the mission of Christ; to stand with the less privileged and to anticipate the advent of the Kingdom of God. Though the church has always had concern about social justice, the structured teaching on social issues started in the 18th century when the industrial revolution metamorphosed the social strata with the widening gap between the rich and the poor. Since then, whenever there is a social injustice, be it poverty, war, migration, environmental degradation, child abuse, or any moral decline,  the church raises its concern and provides an official understanding to enlighten the faithful and to compel decision-makers.

At the end of today’s sessions, participants gathered in small groups of four people each for further appropriation and actualization of the topics. The helpful insights for small groups were drawn from what was the initial motivation for the participants to join the justice and peace commission; the challenges that are faced and the joys of that mission. Besides those insights, there was also an ultimate question on the personal understanding of the human person as per today’s teachings on the CST.

The motivation to join the justice and peace commission comes from the Christian duty to be agents of peace and reconciliation. Some challenges faced in that mission include the lack of knowledge about the stand of the church on some issues, as well as insufficient skills in reconciliation and conflict resolution.

Overally, it was understood that a human person is a valued creature that deserves protection, promotion, respect and love. The day ended in beauty with hope to start early tomorrow with the principles of the CST and the thematic study of its major themes.