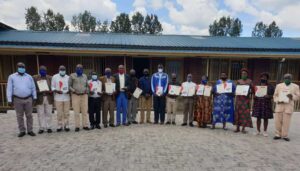 From the 24th to the 26th November, at the premises of Centre Bon Pasteur that hosts all the offices of Ruhengeri diocese, 15 participants benefited from a workshop on Catholic Social Teaching that Jesuit Urumuri Centre is running dioceses across Rwanda. The participants include members of Justice and Peace commission from different parishes, and workers of the diocese in Caritas.

On the first day of the workshop, two modules were covered: Theological and biblical foundations of the CST, and historical development of the CST. In the first module, the presenter reminded participants of the importance of CST and the end-goal of the workshop. He emphasized that we are in the era of so much information embedded with bounteous misinformation. Today’s generation think they know it all, yet they know very little and the outcome is poor decision-making that ends in rampant evils in the society. In the face of this challenge, since its beginning, the church has endeavored to form people’s consciousness in the ability to make informed decisions.  The end goal of the workshop that JUC has initiated across the country is personal conversion of participants and eventually the social conversion since, like saint Paul, one person converted can convert innumerable others.

In the second module, historical development of CST, the presenter browsed through all the social encyclicals from RerumNovarum (1891) of Pope Leon XIII to FratelliTutti(2020) of Pope Francis. Four historical periods have marked the history of social teaching of the church. In each period, encyclicals were written to address the problem of the moment. The first period is industrial revolution of 1800s during which RerumNovarumwas published. The second period is the economic crisis of 1930s during which Quadragesimo Anno was published. The third period is the Second World War in 1940s during which no encyclicals were written because of the war. The fourth period is the afterSecond World War and its adjacent Cold War( from 1960s to today) where so many encyclicals have been written; they include: Mater et Magistra, Pacem in Terris, PopulorumProgressio, OctagesimaAdveniens, EvangeliiNuntiandi, LaboremExercens, SollicitudoReiSocialis, CentesimusAnnus, Evangelium Vitae, Deus Caritas Est, Caritas in Vertate, Laudato Si and FratelliTutti. In addition to these encyclicals of post Second World War, there is also the ecumenical council of Vatican II that published a number of documents to address social issues, with  Gaudium et Spes at the forefront of such documents.

On the second day of the workshop, two modules, principles of the CST and thematic study of the CST, were covered. In total, nine principles and eight themes were highlighted. The principles include: dignity of the human person, respect of the human life, family, rights and responsibilities, common good, preferential option for the poor, rights of workers, solidarity, and protection of the environment. The themes that were echoed in the thematic study are more or less crosscutting issues raised in the principles. The themes include: family, labour, development, human rights, politics, peace, culture and inculturation, and ecology. In all the themes, the core message was to remind participants of the stand of the church on different issues that could be raised on each of the themes.

On the third day, the last module was covered. It is about the pastoral planning and advocacy. The aim of this module is to prepare participants on how to use the knowledge acquired during the workshop in planning. For this aim, participants, in their respective working groups, were asked to identify a case and study it following the steps evoked in pastoral planning and advocacy module. These steps follow the methodology of “See –Judge –Act” intertwined in the stages of “historical moment, ideological moment, and political moment” for analyzing any case that may rise in the society. 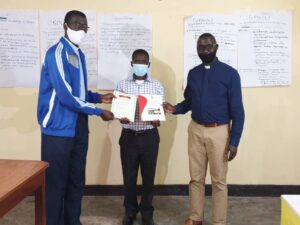 As the culture calls for celebration of achievements, a journey through the social teaching of the church is an achievement worthy celebrating. In this regards, upon completion of the workshop, a short get-together was organized at Centre Saint Vincent for farewell and celebration of certificates. In this series of workshops, with Ruhengeri diocese covered, only two dioceses (Kibungo and Kigali) are remaining for the whole country to be covered. The journey continues!